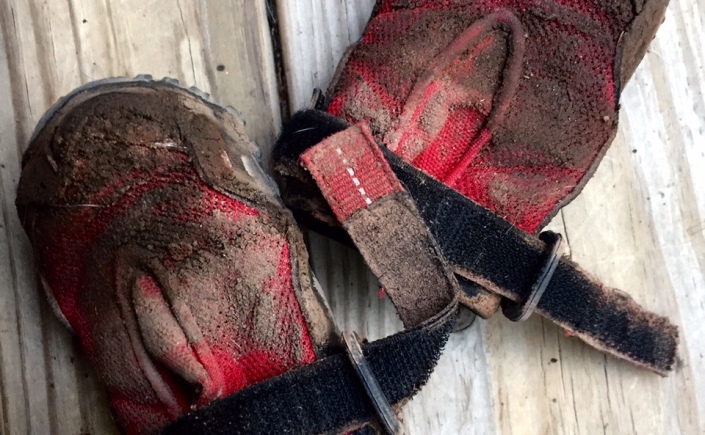 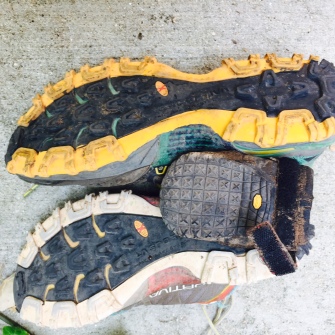 These boots actually have Vibram soles for maximum traction, and fit like a glove to dogs’ paws

When backpacking or hiking a 14,000′ peak, basically anywhere a paw injury would mean more than a simple stroll back to the car, we always carry booties for Bella.  The brand we had been using was working out fine, but we noticed that they didn’t have any tread, and they didn’t have a very close fit to allow for maximum dexterity on rocks.  Bella had only really used them on snow, and slipped a bit when at full speed.  My fear was that if we put them on her on rocky terrain, she could slip on steep or slick rocks, which she is used to navigating with the agility of a mountain goat with her bare paws. This usual confidence on rocks could mean a devastating injury if wearing treadless booties.

When we contacted Backcountry K-9, they suggested we try Ruffwear’s Grip Trex.  These boots actually have Vibram soles for maximum traction, and fit like a glove to dogs’ paws. Backcountry K-9 also suggested that we re-measure her paws, as we mentioned that she frequently got tripped up on her “back boots,” which seemed to fit a little on the larger side.  It is very common for dogs to have smaller back paws than front paws! Sure enough, Bella’s front paws were about a quarter inch larger than her back paws.

With her new measurements, Backcountry K-9 sent us a set of four “custom sized” boots.  All Ruffwear brand boots are available in singles to allow for different matched sets (or to replace a lost boot).  Like human boots, we didn’t want Bella’s first experience with her brand new kicks to be on a major excursion.  So, we took her on a few 6-10 mile trail runs in Chautauqua Open Space in Boulder first to test out the boots.  Here is what we found:

Bella tries her boots for the first time

Watch Bella Run in her Grip Trex on YouTube! 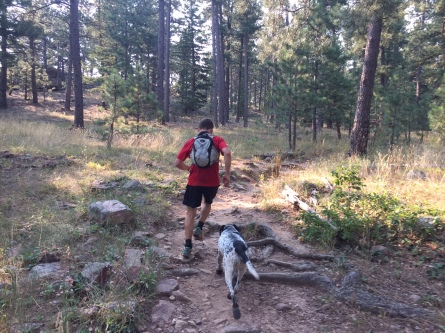 Bella hits the trails with Pat, and her Grip Trex

A great product if your dog requires boots for any reason, and requires tread.  This may be a great product for elderly dogs, dogs with paw injuries/deformities, dogs whose paws are sensitive to rough terrain, or dogs completing a long backpacking or other endurance journey.  Closely monitor your dog’s dew claws for irritation when using this product.

We didn’t end up needing these boots on our longest backpacking trip this fall, however we brought them with us for the peace of mind that they could offer when many miles out in the wilderness!